"She sinks down on her knees, takes the dear hand in her arms, and kisses the cold forehead." 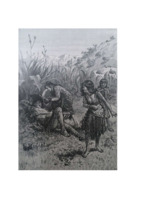 "I'll put them on, / Help me, my lord, and you shall see me now / Somewhat as I shall look at Court with you."

"Where the little stream / Parts a green hollow 'twixt the gentle slopes."

"Silva, if now between us came a sword" 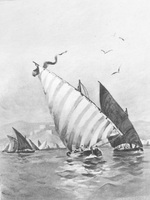 Fedalma Dances in the Street

Maggie and the Gypsy

"It was one of their happy mornings."

“A large man in a smock-frock, with a pitchfork in his hand, rushed up to Mr. Freely and hugged him, crying out, ‘Zavy, Zavy, b'other Zavy!’”

"I am waiting for something else"

“[Maggie was] looking darkly radiant from under her beaver-bonnet” 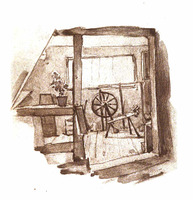 History of the Devil

"Why did she stand before me with the candle in her hand, with her cruel contemptuous eyes fixed on me, and the glittering serpent, like a familiar demon, on her breast?"

"To ask the name of this town"

"She held the door wide"

"She turned from the window with gladness in her eyes"

"The father whose return is greeted by young voices" 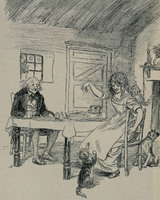 "Inviting Silas with much chuckling"

"Silas fell on his knees"

"Holding his son Aaron between his knees"

"His hospitality rayed out"

Arrivals at the Red House.

"He was seen setting off"

"The company at the 'Rainbow.'"

The Cry of Desolation

"The object of his search"

"The risk of fording streams"

"With a heavy bag on his back"

"Take to their legs in terror"

"She retreated to her father's chair again, and held him round the neck."

“In utter amazement, Silas fell on his knees”

Solomon marched forward at the head of the gay procession

Seated on the pillion behind her tall, erect father

"Suppose, now, you get the money yourself, and save me the trouble, eh?"

"The minister asked him if he knew where he had left that knife?"

Silas Marner at his loom

"Lizzie advanced without hesitation, and put out one hand, while she fingered her coral necklace with the other."

Just on the slope by a clump of laurels, where they can see the sunbeams sparkling among the water-lilies

"She lingered at the door before she gathered courage to knock."

“He stroked the satin head, and said in his gentlest voice, ‘How do you do, Lizzie? will you give me a kiss?’”

“While this conversation was going forward, Dickey had been furtively stroking and kissing the soft white hand”

“Tito rose and was about to move away”

“Tessa looked up and saw a lady in black”

Will His Eyes Open?

But You Will Help Me

“Father, I will be guided”

"You didn't think it was so pretty, did you?" 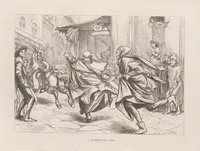 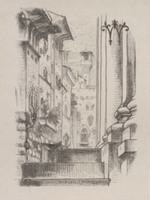 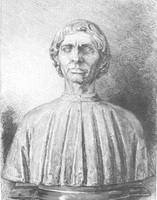 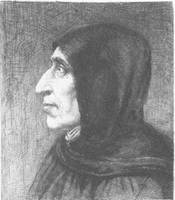 Tito and the Ring

"Suppose you let me look at myself"

“They sat in that way without looking at each other, until the rain abated and began to fall in stillness”

“The painter said, ‘It is as Santa Clara that I want you to stand’”

“Mary looked up with some roguishness at Fred”

"She laid her hand upon his shoulder; I repeated 'I am ready.'"

"Raffles started up and stared round him in terror"

"What is the matter? You are distressed."

"She saw... something which made her pause motionless."

"Promise me, Papa, that you will consent to what we wish."

"This is come to pass and the rest will come."

"I have brought a little petitioner."

"It's all one to me. I can make five codicils." 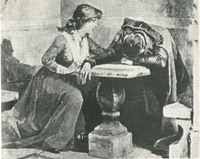 Dorothea finds her husband in the garden

Dorothea working for her man

Dorothea at the Vatican

Will Ladislaw calls upon the widow

With the man she loves

More wife than he had bargained for

The Lydgates do not understand each other

"They will marry; yes, they will"

Dorothea Finds her Husband in the Garden

Esther and Felix at the Stile

“He was looking up at her quite calmly”

"She stood, divested of all personal considerations, whether of vanity or shyness."

"You really have no idea what an impression it conveys when you say you are a radical."

"There were trim cheerful villages."

"You are very beautiful."

"Mrs. Holt sat on a stool, in singular relief against the pedestal of the Apollo."

"She heard herself called 'Mother!' and felt a light kiss on each cheek."

Esther receives Felix in her kitchen

The Reverend Lyon receives a Christian of sorts

Felix Wounded in the Riot

Lydia Glasher and Gwendolen at the Whispering Stones

Grandcourt and Gwendolen at the Archery Tournament

"Here I have listened to the messages of earth and sky"

“Here Gwendolen seemed a Calypso among her nymphs”

“But in the course of that survey her eyes met Deronda's”

Klesmer made a low bow in silent irony

"How I pity all the other girls at the archery meeting!"

Was it a fit of madness?

She was the victim of his happiness

If, because of anything her brother said to him, he went away

Wheeled past the group with an unmoved face

Grandcourt and Gwendolen and the Poisoned Diamonds

Gwendolen at the Gaming-Table

Hetty and Arthur Donnithorne in the Wood

Hetty Sorrel at the pool

Hetty has a visitor

Two Lovers by a Moss-Grown Spring 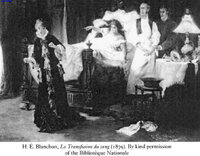 How Lisa Loved the King

"Would sing as finely to this suffering child, / As at the court where princes on him smiled."

"Our meadow-path had memorable spots: / One where it bridged a tiny rivulet."

"The house was held / As if a storm were listening with delight / And hushed its thunder."

"Place for the queen of song!"

"Yet quiet, lowly as a meek white dove, / That with its presence teaches gentleness."