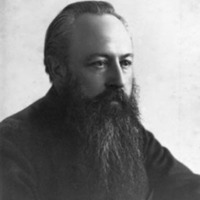 An admirer of George Eliot, John Emerich Edward Dalberg-Acton was an eminent Cambridge historian. He met George Eliot and George Henry Lewes several times in the last years of Lewes' life and was also a friend and advisor to John Cross. As may be gleaned from Dalberg-Acton’s letters, he became a dedicated fan of Eliot. In his writings about her, he took a unique stance on her religious views, saying that she could reach those that Christianity could not.