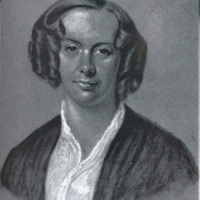 Susanna Chapman was the wife of John Chapman; John was publisher of the Westminster Review, where George Eliot was the de facto editor from 1851-54. Susanna Chapman ran a boarding house where many writers for the journal lived, including George Eliot.

Susanna was older than John by fourteen years and much wealthier. Her inheritance from her lace manufacturing father allowed John to purchase properties and businesses after they moved to London. His poor money management skills strained the marriage.

Susanna Chapman bore four children, though one died in infancy and another with special needs was adopted by Susanna's brother.

John Chapman and George Eliot may have been lovers while she was living in their boarding house, according to biographer Gordon Haight, who gleaned suggestive evidence from John Chapman's diary. The diary showed that the Chapmans' nanny was also having an affair with John. Eventually, after spending many years living with John and his mistress(es), Susanna separated from him in 1874. He left for Paris to practice medicine, while Susanna continued to raise their children in England.